When it HAS to be there!

Our Courier Services in Edinburgh

With our fleet network working around the clock to meet your courier needs, Point2Point Courier Service is able to facilitate urgent same day, same day and next day courier deliveries from Glasgow to Edinburgh and Edinburgh to Glasgow working across the motorway network.

Our Edinburgh courier offering is fast, efficient, professional and we are there for our existing customers as well as new Edinburgh courier enquiries not only to deliver within the Central Belt of Scotland but also further afield across Scotland, England, *UK, as well as **International courier deliveries, picked up from Edinburgh.

*Packages or pallets collected from the customer by C.O.B are then delivered throughout the UK by C.O.B the following day. ** Some Worldwide addresses may be exempt.

Thousands of journeys are made each day in the Edinburgh and Lothian region as well as millions of journeys by public transport every year. Edinburgh’s road, rail, air and sea network is constantly evolving to keep up with the daily demand of business travellers, tourists and the local Edinburgh population.

Access to Edinburgh has greatly improved over the years with the Edinburgh City Bypass, designated as A720, now one of the most important trunk roads in Scotland and the Queensferry Crossing which opened on the 30th of August 2017. The new bridge crossing formed the centrepiece of a major upgrade to the cross-Forth transport corridor in the east of Scotland. This was one of the biggest infrastructure investments made by the Scottish government in the last 30 years. At 1.7 miles (2.7km) the structure is the longest three-tower, cable-stayed bridge in the world and also by far the largest to feature cables which cross mid-span.

An interesting fact, Edinburgh Castle is built on an extinct volcano. The Royal Mile is actually one mile and 107 yards long. The great city of Edinburgh was the first city in the entire world to have its own emergency fire service. The city has approximately 112 parks and more trees per head of population than any other city in the U.K.

Other areas Edinburgh is also famous for: 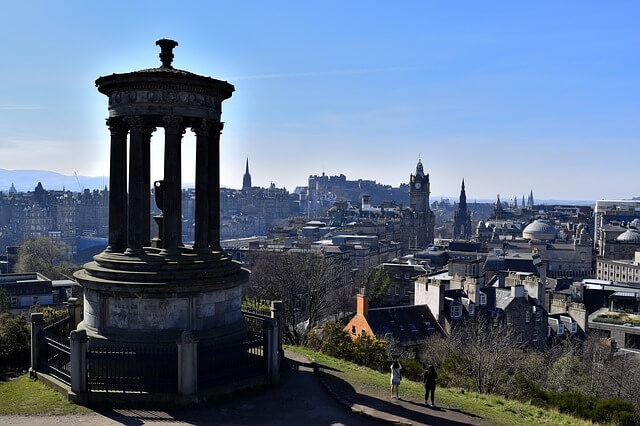